Competitive swimmers spend long hours in the pool working hard to get stronger and faster, which is demanding on both the body and mind. Coaches often use a variety of games in the pool to lift spirits and add some fun after a week of grueling workouts.

Here is a list of swimming games that coaches use that not only make practice fun but help build and improve upon certain skills.

The classic version of the game sees one swimmer as the shark, chasing as many minnows down as he/she can. The minnows swim underwater dolphin kick as fast as they can from the wall and the shark chases them on the signal of the coach. The last minnow to be tagged (touched on the toes) is the winner.

This game can also be played by partnering swimmers up in pairs – one being the minnow and the other being the shark. They then swop at the end of the length. A variety of strokes can be used from underwater dolphin kick with or without fins to freestyle.

This simple game produces much laughter and works the entire body from the arms to the legs. Cover a large watermelon in Vaseline and throw it in the center of the pool. The first person or team to get the watermelon out of the pool is the winner.

Water Polo is another classic swimming game that all water-lovers enjoy. Dating back to the 1800s, the game of water polo has delighted swimmers, giving them a break from their arduous swim sets and workouts.

Split swimmers in half, setting teams against each other. Set up two goals on opposite sides of the pool using nets or kickboards. The team that scores the most goals wins. 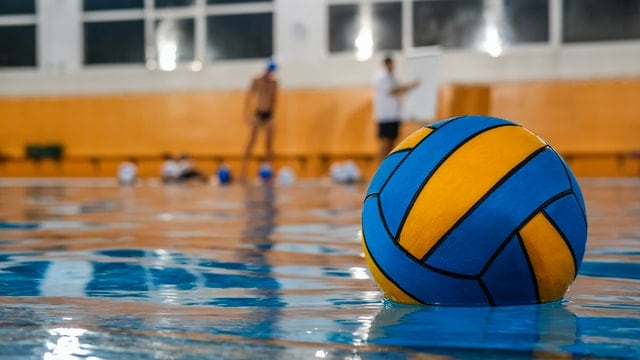 Water Polo is another classic swimming game that all water-lovers enjoy.

This is a great game for building lung capacity and improving underwater skills. Divide the swimmers into two teams and use a “ball” that sinks to the bottom. The game begins with the “ball” in the middle of the pool and the aim of the game is for the teams to try and get the ball into the ‘end zone (the area between the flags and wall).

Swimmers need to take a breath when needed and not stay under the water too long. The team with the most goals in the end zone wins.

Car Races is another great game for working on underwater kicking and lung capacity and this game can be played with or without fins. The game is simply a car race – but on the bottom of the pool. Each swimmer has their own little “car” – this can be anything from a real Hot Wheels toy car to a toy that sinks or even a pull buoy if no other toys are available. 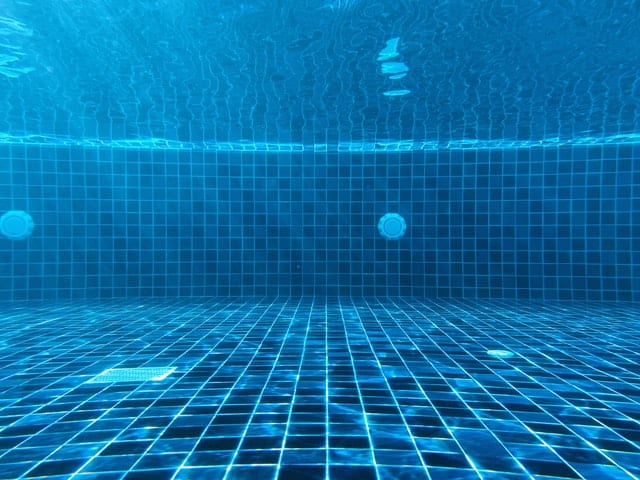 Car Races is a great game for building lung capacity and underwater kicking.

Pigeon is a creative and competitive game that can be played for hours on end, and it works the speed and endurance of all the swimmers playing. The main player is the storyteller – this can be the coach or a swimmer, and the storyteller will change after each round.

The other players all line up at one end of the pool, and the storyteller begins to tell a tale, using his or her imagination to create a story. The storyteller must incorporate the word “pigeon” and every time he or she says the word, the swimmers must race across the pool as fast as possible. The last person to climb out of the pool at the other end is out and withdrawn from the game.

The aim of the game is for the storyteller to make the tale as tricky as possible by using words starting with “p” that sounds similar to “pigeon” to fool the swimmers into thinking they are saying “pigeon” and making them false start. These swimmers are then disqualified from the game until a new round starts.

The winner is the last remaining person in the game.

Marco Polo is a game of tag where one person is the main player and has to close their eyes and try to find the other players. The main player shouts “Marco” and the players have to call back by shouting “Polo” allowing the main player to sense where they are and find them.

This is a super game for building kicking strength and speed. Divide swimmers into two teams, each of which starts on opposites of the pool. Swimmers have kickboards and this game can be played with or without fins. The coach stands in the middle of the pool and at his or her signal, swimmers kick as fast as they can towards their partners. When they meet, they turn their kickboards sideways and push against each other as if they are kicking against the wall. They have to kick as hard as they can, trying to push their partners towards the opposite wall. 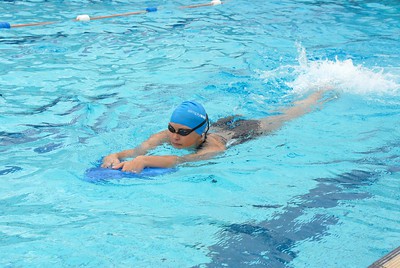 The Amazing Race is a simple, yet a competitive game that works on all skills from diving, exiting the water, endurance, speed, and strength. Swimmers line up at one end of the pool, dive in, and swim as fast as they can to the other side of the pool. When they get out, they perform various exercises like push-ups, sit-ups, star-jumps, and others, and then dive back in and swim back. It is a race between swimmers to finish first.

The T-Shirt Relay is a fun drill or game that the whole team can take part in. Divide the swimmers into teams who will then race one another, with each swimmer racing a length in a t-shirt. At the end of the length, they exchange it with the next member of their team before they can swim their leg.

The starting swimmers begin with the t-shirt on and race to the other side. On completing their leg, the first swimmer gets out of the pool, takes off the t-shirt, and gives it to the next swimmer with the help of their teammates. The whole team can get involved to make the t-shirt transition quicker.

Once the t-shirt is on the second swimmer, they race to the other side where they do the same with the third swimmer. The team that finishes first is the winning team. 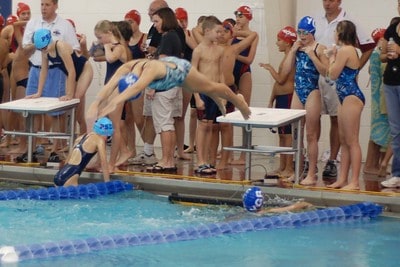 The T-Shirt Relay is a fun drill or game that the whole team can take part in. Airborne by terren in Virginia / Flickr / CC BY-NC-ND 2.0

This is a fun game to end a workout that works on breath control and lung capacity while adding some lighthearted fun. Fill a water bottle with water and re-cap preferably with a white cap. Players line up on the side of the pool facing the other way and the coach throws the water-filled bottle into the pool. On the signal, swimmers then jump into the pool and try to find the bottle, which will blend into the background. The first swimmer to find the bottle is the winner.

This game can be played by all levels of swimmers at any depth in the pool. Experienced swimmers can play in the deep end and tread water, which makes it a great workout for the core and legs. It can be played with just three players (one in the middle as the Fishy) or a group of players divided into two teams with several players in the middle.

Noodle Joust is a game that demands strong core muscles and good balance. Swimmers can sit or stand on their kickboards and must try and get their opponents off their boards by jousting with them. Beginner swimmers can sit on noodles instead of kickboards. 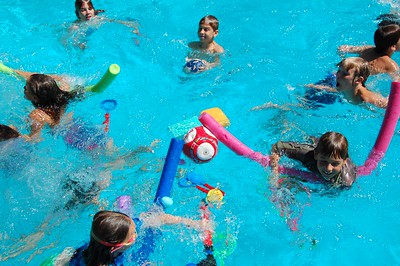 Chicken Fight is a water-wrestling game that provides great fun for experienced and stronger swimmers. Each game requires four players with two on each team. For a fun tournament-style game, more players in multiples of two can join in the fun. The water needs to be shallow enough for the standing players to stand with their shoulders and head out of the water.

Be sure to play this game in the middle of the pool and away from the sides where injuries might occur if players fall off too close to the wall. 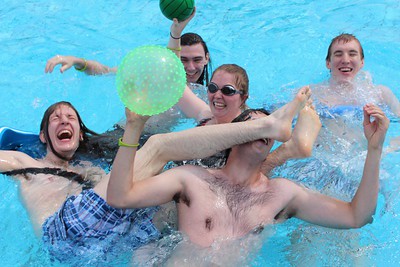 Octopus Tag is a fun game for a large group and is similar to Marco Polo and Sharks and Minnows. One player is chosen as the octopus and stands in the middle of the pool. The other swimmers must line up along one side of the pool and when the octopus yells “Go!” they must all try to swim as fast as they can to the other side without getting caught.

Anyone who is caught or tagged by the Octopus joins the Octopus by holding hands. The Octopus and his new teammates must then try to catch swimmers as they swim across again, but they are not allowed to let go of each other’s hands – they must work as one team.

Atomic Whirlpool is just that – a whirlpool created by swimmers moving in unison in the water. The more people that take part in this game, the better, as a stronger current is formed, and it needs to be played in the shallow end of the pool where players can stand.

Swimmers line up in single file behind one another, with one swimmer as the designated leader of the pack. The leader then begins walking slowly in a large circle towards the end player, while everyone else follows behind in a circle formation.

Once the leader has caught the end player and a circle is formed, the leader must start running in the water and everyone must follow. Players continue running until a whirlpool is formed. The leader then shouts “turn” and players must follow the leader and change direction and run in the opposite direction of the whirlpool and into the current.

Air Ball is a combination of volleyball and water polo with the aim of the game to pass the ball to other players in your team and try to score goals without the ball ever touching the water. Once the ball touches the water, the round is over. 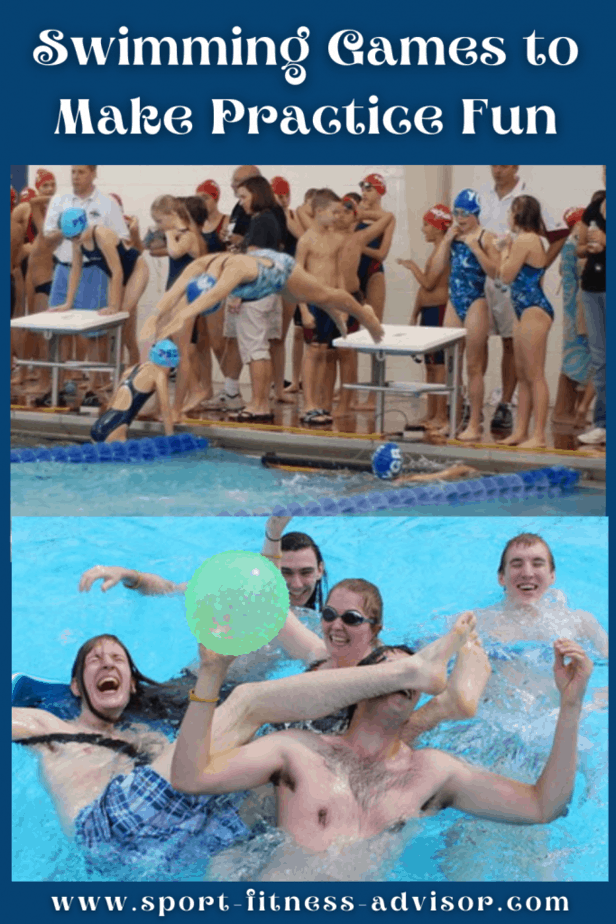 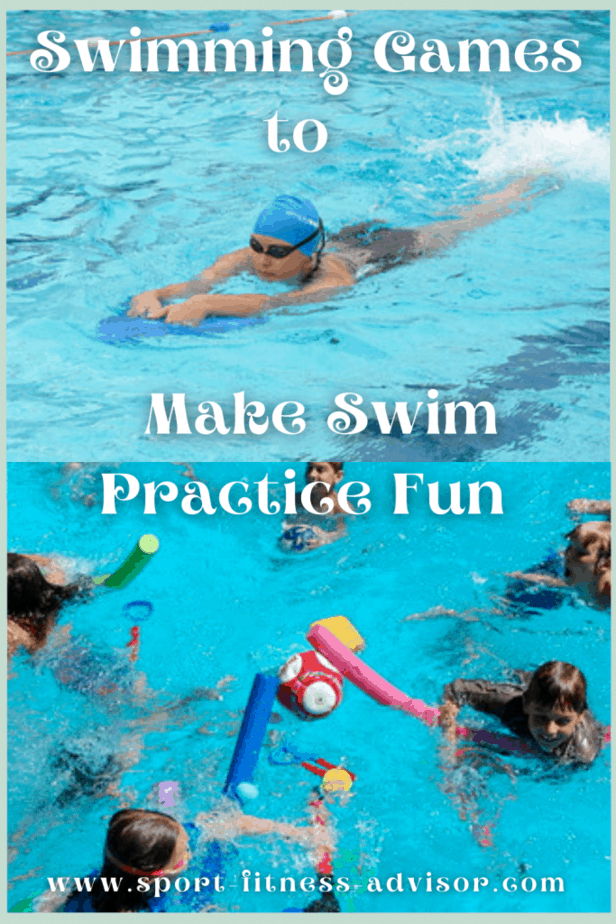