Treading water is an important life-saving skill for everyone to learn as it can get you out of a difficult or life-threatening situation. It is important to learn to tread water efficiently as using the wrong technique can consume large amounts of energy, which would be counter-productive in a life-threatening scenario.

What is Treading Water?

Treading water is an action performed in the water using the arms and legs to stay afloat. It is something most people learn before learning to swim as it is a basic survival swimming skill. Treading water is also used frequently in aquatic sports like water polo and artistic and synchronized swimming and can help build stamina and strength throughout your body.

Treading water is performed in a vertical position with the head above the water. The arms are used to balance the body in the water, while the legs perform a specific kick called the “egg-beater” kick to keep the body afloat. The arms and legs move in a way as to not propel the body in any direction, but simply keep it afloat without using excessive amounts of energy. 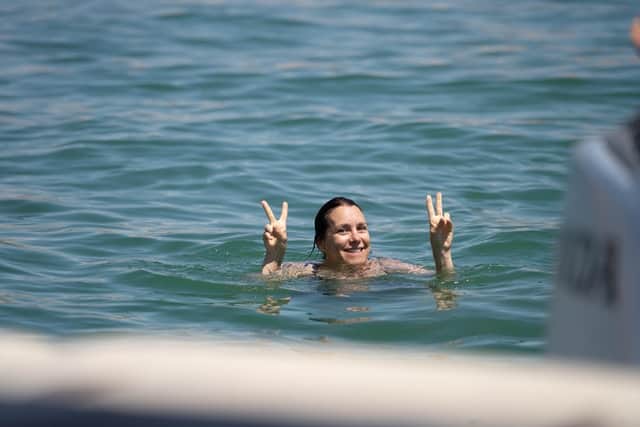 Treading water is performed in a vertical position with the head above the water.

Why Do We Need to Learn to Tread Water Effortlessly?

Treading water is a skill that is key for basic water safety, as well as essential for being able to partake in watersports such as water polo, artistic swimming, and synchronized swimming. For all of these activities, treading water allows the person to stay afloat with minimal energy expenditure.

Treading water is a huge part of water safety, and if the need arises, it is important to be able to swim in place without expending too much energy to wait for help. Treading water is a fantastic confidence booster for swimmers of all ages and is especially important for young children to learn to help keep themselves safe.

How to Tread Water Effortlessly – A Step-by-Step Guide

Step 1: Keep the Body Upright in a Vertical Position

When treading water, the body must remain in a vertical position. While it may seem easier to lay horizontally in the water if you are in trouble, it is dangerous to have your face at the same level as the water as it increases the risk of getting water in your eyes, nose, and mouth.

Keep the body in a vertical position with the head above the level of the water and the spine straight. Spread the arms slightly outwards with a bent elbow and use the hands to gently scull the water. Sculling is a movement in which the hands move in a figure of eight.

If you are in an emergency, it is vital to manage your breathing and psychological state. Panic can kill, so take a few deep breaths to calm down and relax the body and mind. Spend a few moments taking stock of the situation, keeping your emotions and thoughts in check, and breathing deeply to lower your anxiety. 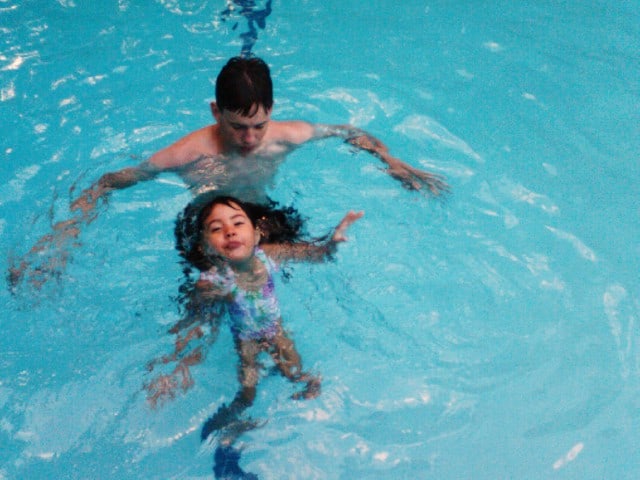 Keep the body in a vertical position with the head above the level of the water and the spine straight. Learning to Tread Water II by Eden, Janine and Jim / Flickr / CC BY 2.0

Step 3: Tilt Your Head Back

Tilt your head back to prevent water or waves from splashing in your face. Just tilt the head back enough to keep the face out of the water – don’t tilt too far back as this can also allow water to enter the eyes, nose, and mouth.

Step 4: Use the Hands as Paddles

Once in a vertical position with the head above the water, the spine straight, the head slightly tilted back, and relaxed breathing, you can now start moving the arms and hands to help keep the body afloat. Move the arms slightly outward from the body with a slight bend in the elbow.

Keeping the hands in a horizontal position and the wrists joints strong, move them gently in a back-and-forth motion or a figure-of-eight movement. This is known as sculling. The hands should make a small downward circle under the water, swirling the water back and forth.

It is important to divide the energy expended evenly between the arms and the legs to save as much energy as possible. The legs will naturally use more energy than the arms as they have larger muscles, so try to use the hands efficiently to help the legs.

The legs will work in conjunction with the arms to help keep the body afloat. The legs can be kicked in multiple ways, including the following:

The best, most energy-efficient technique to use for treading water is the rotary kick. Also known as the egg-beater kick, this type of kick is where one leg rotates in a clockwise motion while the other in the opposite direction. It takes some time to master, but once perfected, is super-efficient and expends the least amount of energy of all the kick movements.

How To Do the Rotary / Egg Beater Kick

The rotary kick or egg-beater kick is used for aquatic sports like artistic and synchronized swimming and water polo. 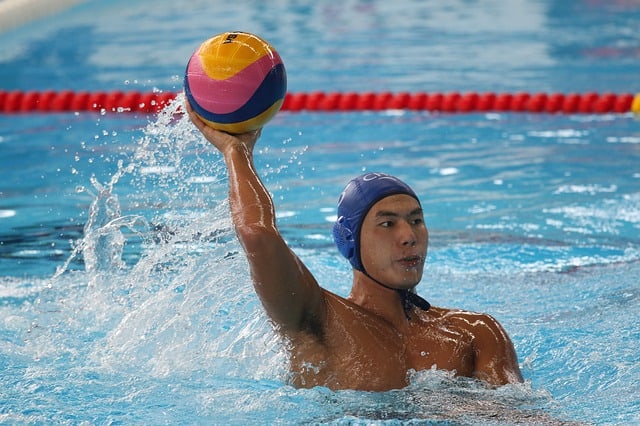 The rotary kick or egg-beater kick is used for aquatic sports like water polo.

Step 6: Take Time Out to Rest

No matter how energy-efficiently treading water is performed, human beings can only tread water for so long before becoming tired. It is important to take a rest from pulling and kicking to save energy. Take a rest by lying horizontally in the water if there are no waves.

Spread the arms and legs out in a starfish position and float gently on your back for a few seconds to rest. If there are waves around, keep the head tilted slightly upwards to prevent water from entering the eyes, nose, and mouth.

Once rested, begin treading once again.

Watch this video on how to tread water. 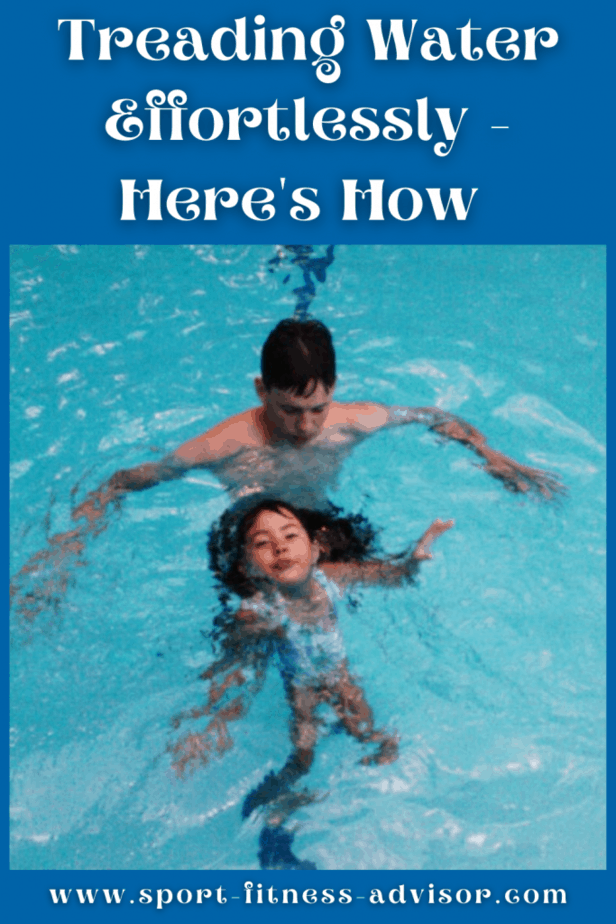 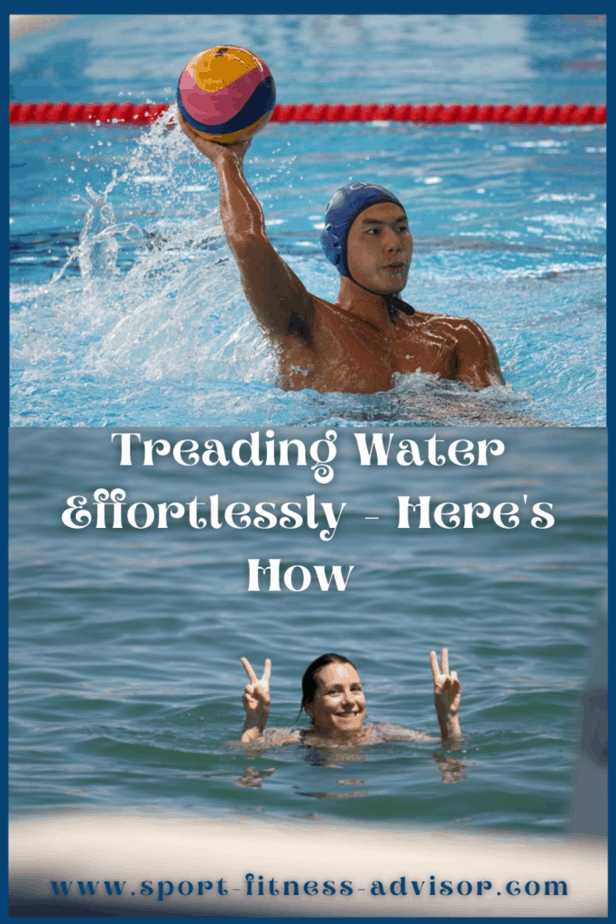