If you’re an athlete, pay attention! This may be one of the best “cheat codes” you could ever unlock for game day. It’s basically a “legal steroid” that you can start training to propel your game to the next level. I’m talking about the French Contrast Method.

The French Contrast Method is proven to increase speed, vertical jump, and overall athleticism for anyone who takes advantage of this training. Regardless of what sport you play, the French Contrast Method will benefit your overall athleticism while transferring the benefits over to the game. It focuses on producing maximal power in a short amount of time. Many professional sports teams already use this type of training along with their own variations of functional workouts.

If you start incorporating this training into your routine, you will see results in a matter of a couple weeks. You will feel yourself becoming bouncier, faster, and more explosive as a result of this method of training. 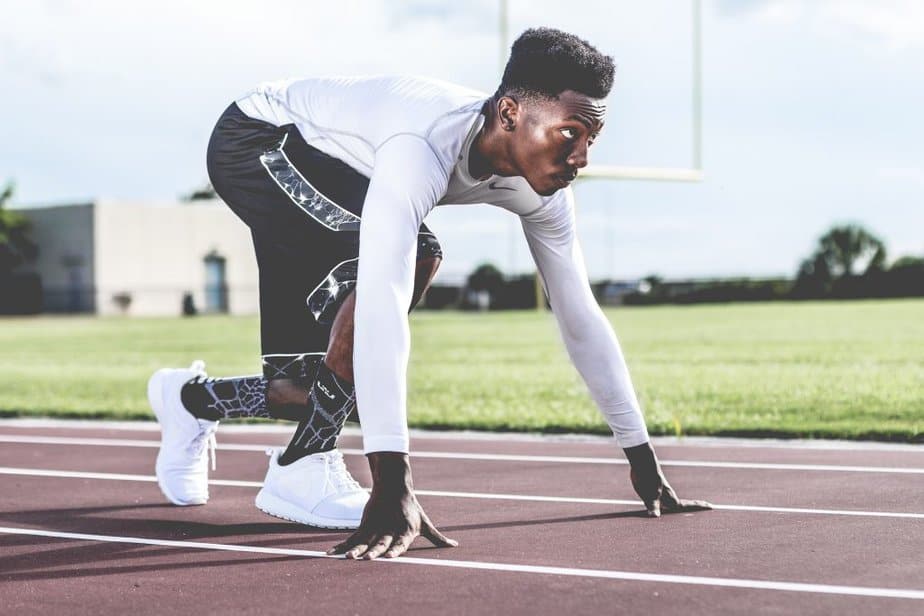 Sprinter getting ready to explode out of his starting stance.

What is the French Contrast Method?

The French Contrast Training was brought to life by track coach, Gilles Cometti. But it started to gain massive attention from a book called “Triphasic Training” which was written by Call Dietz and Ben Peterson.

The French contrast method utilizes the aspect of post activation potentiation or (PAP). The idea is to take a heavy near maximal lift (70-85% 1RM) and proceed into a bodyweight plyometric or a light weight plyometric exercise. The purpose of this training is to utilize the short term increase of power gained from the heavy lift and then perform a similar explosive movement to optimally use that power.

The FCT uses both complex and contrast training combined into one setting.

Contrast training is the utilization of a heavy lift combined with a lighter lift.

Complex training is the utilization of a strength movement combined with a power lift.

This training will be completed by 2 combinations of resisted movements and lighter movements to gain the best results possible. Therefore, the total circuit will consist of 4 movements:

The trend is getting the most out of the force put into the heavier movements so that the lighter movements/plyometrics can be performed as explosively as possible. 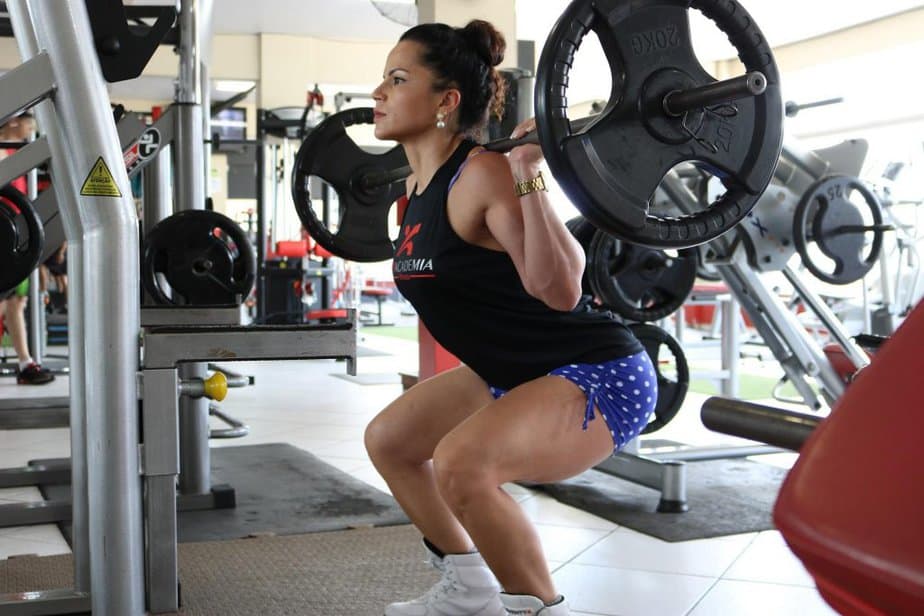 Not only will this help with your explosiveness and power, but it will also help with coordination and balance at the same time! With proper form, you will soon find these movements to be much easier and more focussed on your effort rather than form.

What is Physiologically Happening with the Muscles?

The goal is to increase as much force development and power output in a small amount of time. The PAP (Post-activation Potentiation) is described as something that “enhances

It helps with intramuscular coordination and development. This means that there are as many muscle fibers activated by the nerve during a certain movement. With the FCT, we are taking a near maximal muscle contraction to recruit as many muscle fibers as possible to push the heavy weight, but then to maximize the function of those muscle fibers by doing an explosive moment.

The FCT in return, allows the muscles to elongate while producing as much force as possible in the smallest amount of time. When the muscles elongate, there is stored up energy available in that small time frame that can be expressed when contracted maximally and quickly. This is the concept behind the use of plymetrics. Including plyometrics into the FCT is allowing you to stretch the muscle in preparation for the use of explosive power. The time of transition from eccentric to concentric determined how much power will be exerted.

The Nervous System Is Vital 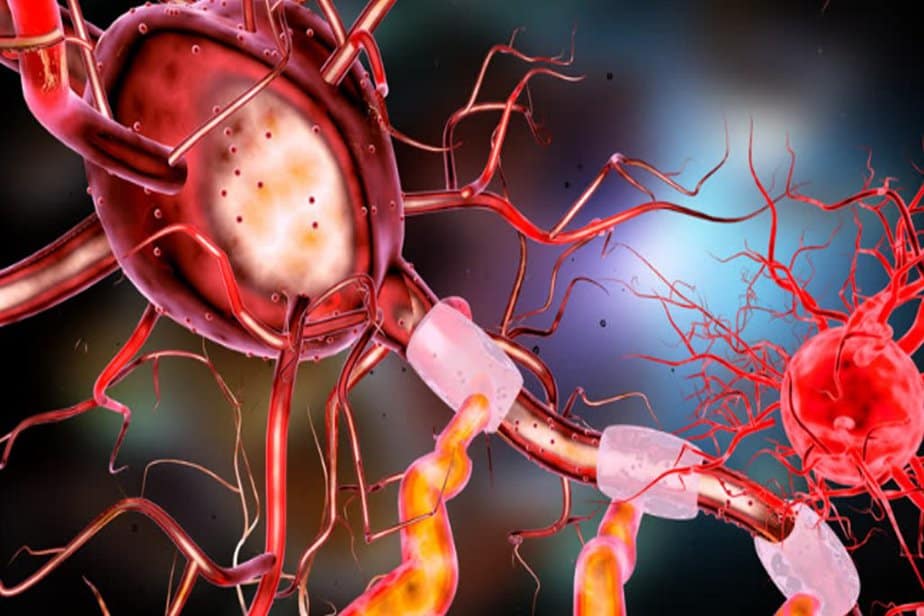 Your muscles fibers are grouped into motor units which each have one nerve that innervates it. If you need to lift a heavier weight then your NS will recruit more motor units. Usually weaker people will not have as many motor units at their disposal when training. Over time, though, the muscles will gain the ability to execute more maximal force output with each rep.

Not only are muscle fibers being recruited during this process, but the nervous system is working overtime. The NS is just as important at producing high force output as the large muscle fibers. The neurological conditioning plays a vital role in determining if you’re strong, regardless of your frame.

When performing the lighter exercise, the brain automatically assumes that you will be lifting the heavy weight again. In this case, the muscle fibers have been previously “primed” to lift heavy and will execute the lighter movement with abit more power gained from the heavy lift.

This is essentially what PAP is and how it comes into play. It is giving the athlete a bit more power in executing the explosive movement in order to produce as much force with the recruitment of recent muscle fibers.

How many sets and reps should I do?

A full circuit of all 4 movements completed once equals 1 set. The heavier movements should be performed from the 3-4 rep range followed by the lighter movements which should be done in the 5-7 range.

There is minimal (about 25 seconds) rest between the exercises as they should be performed shortly after the former. 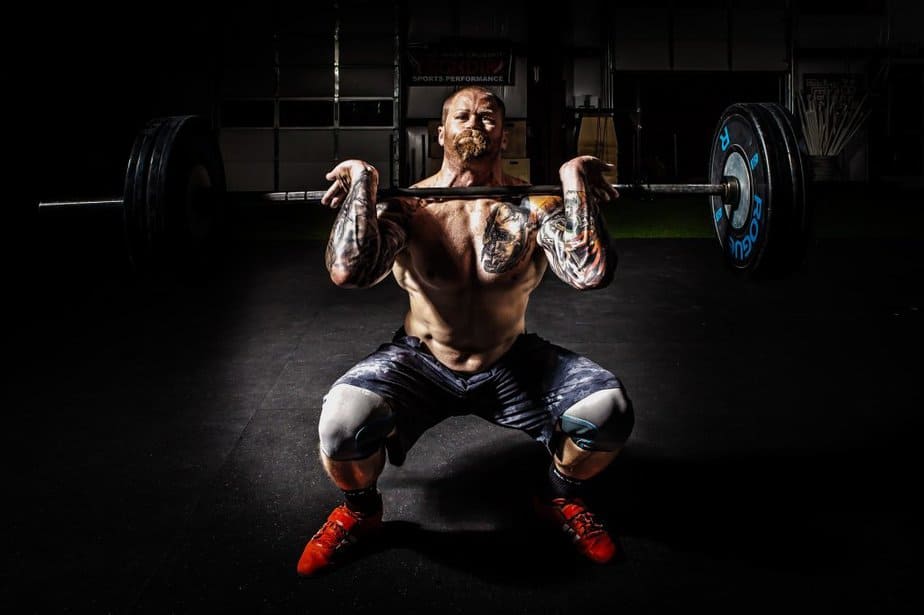 I recommend only 3 full sets if you’re a beginner, but even professional athletes use only 3 sets because they are putting their greatest effort into every rep they perform. It will consume a lot of your energy since you are trying to push every rep as hard as possible. Be reassured that you will be getting out what you put in.

As for any high-intensity workout, I would recommend only doing this 2-3 times a week. Your body will need to adapt and recover, but this will allow time for seeing those results little by little within your practices.

Because the FCT is demanding a lot from your muscles and nervous system, it is important to give time for your body to take a break. You might find yourself platueing sometime a little over a month because you havent given a set time for recovery in your training. When you arrive to the 4th week of training, start considering if that is the time for a prolonged break in order to recovery fully. You may manage to pull 1 or 2 more weeks but it is important for a deload week at some point. Don’t make the mistake of overtraining and putting yourself at risk of injury.

Here is an example of what a basic FCT set up looks like:

You can substitute a heavy leg press for the back squat if there is discomfort with your form. This is what I use in the full regimen shown below: 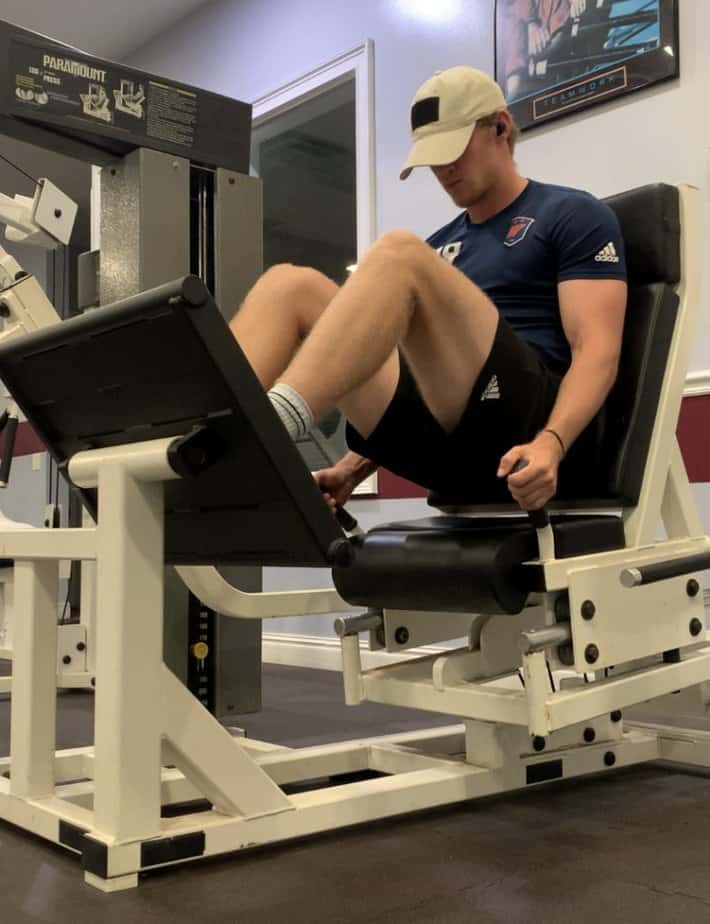 I am performing a heavy leg press 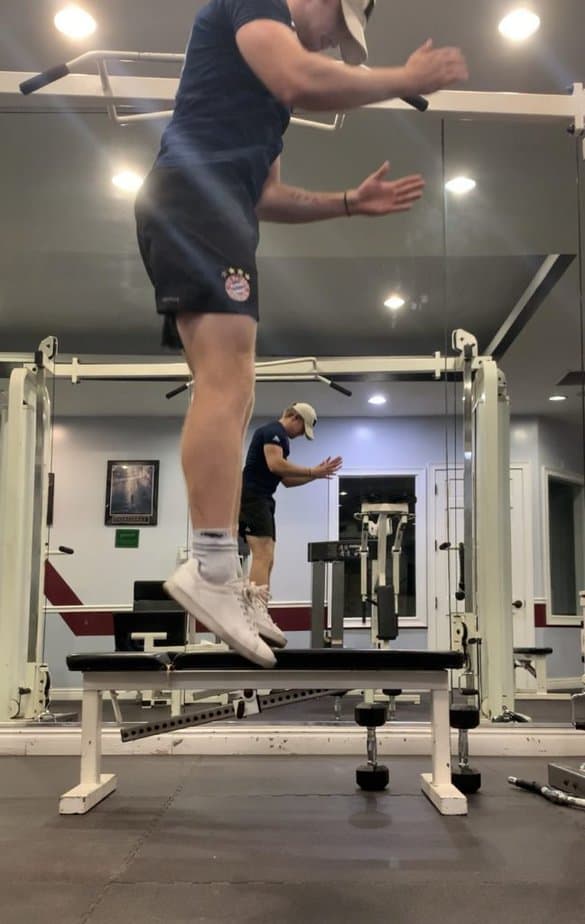 I am performing a bodyweight explosive jump 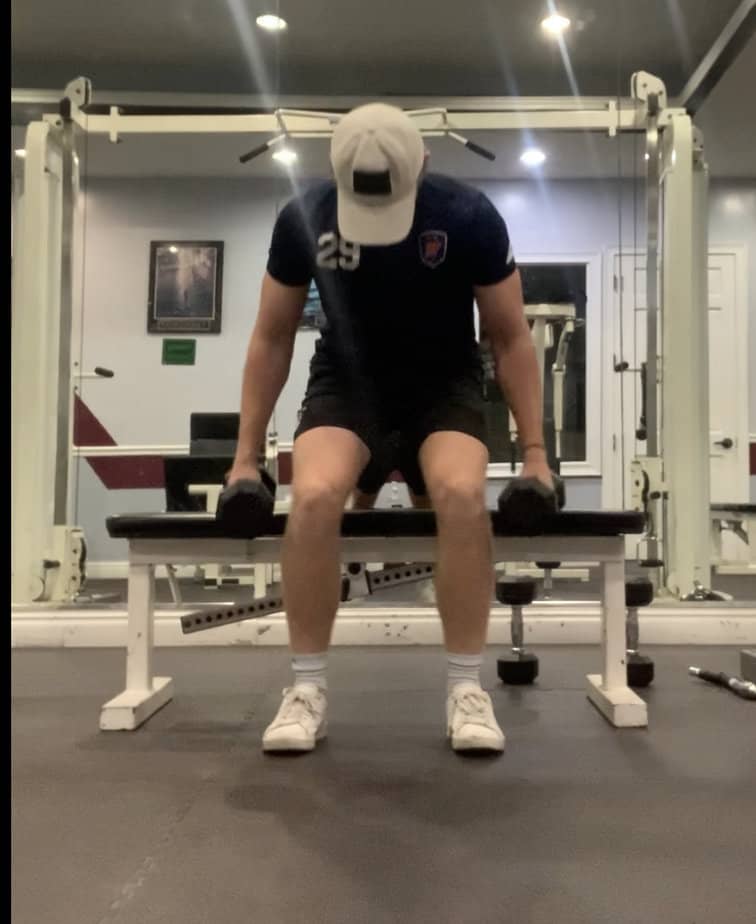 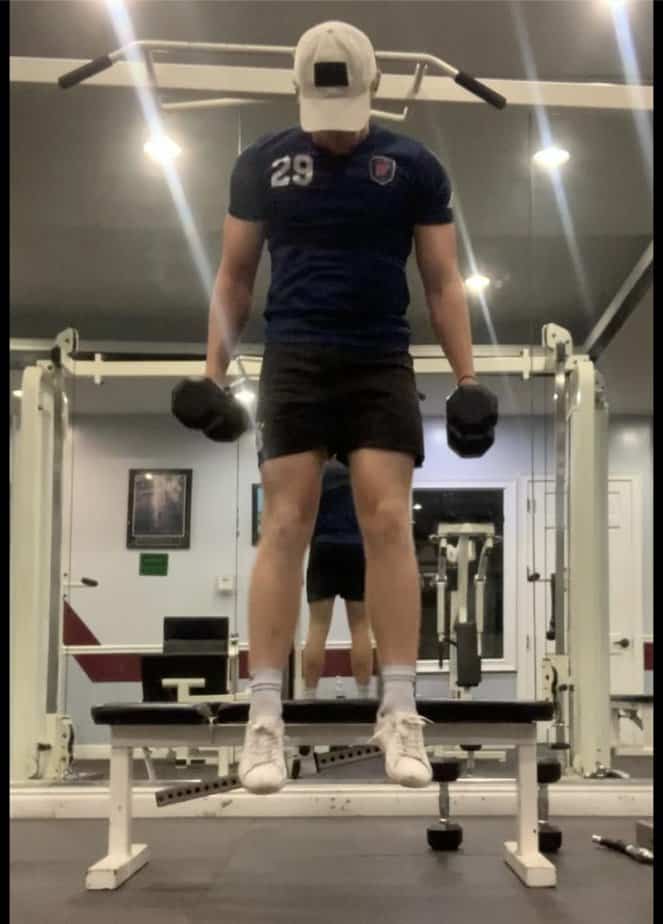 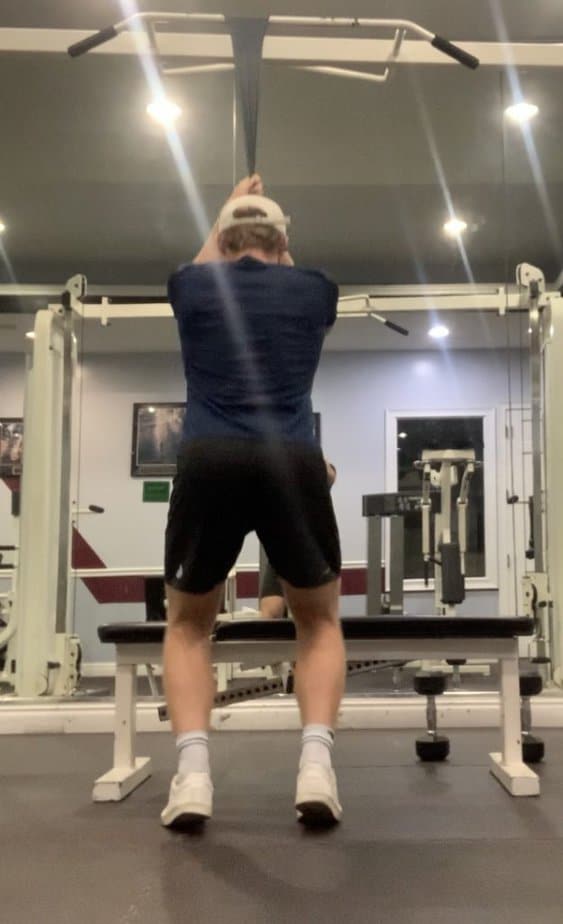 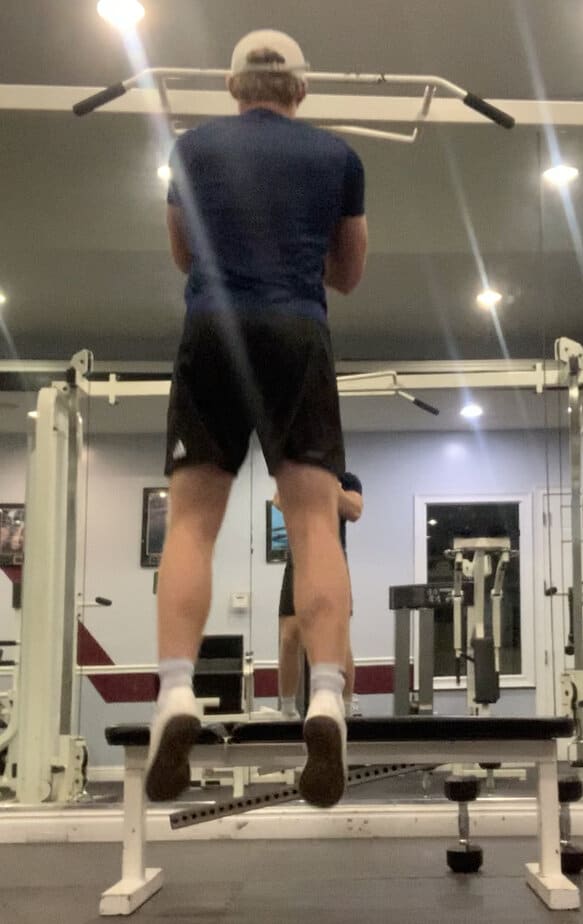 Here I am performing an assisted/banded plyometric.

This specific French Contrast training workout is essential for all athletes. Though, there are various variations of lifts and explosive movements that you can incorporate in the french contrast training. For example, you may like to focus on one leg at a time to account for muscle imbalances. So you would do a heavy lunge lift with a single leg explosive variation. I prefer to do this variation because it helps with my single leg strength and balance.

The FCT doesn’t only apply to the lower body in a vertical motion. You can most definitely incorporate workout focussed on specific parts of the body. This includes an overhead pressing motion, horizontal plane, and hip dominant movements.

Here is an example of a regimen focussed on the horizontal plane: 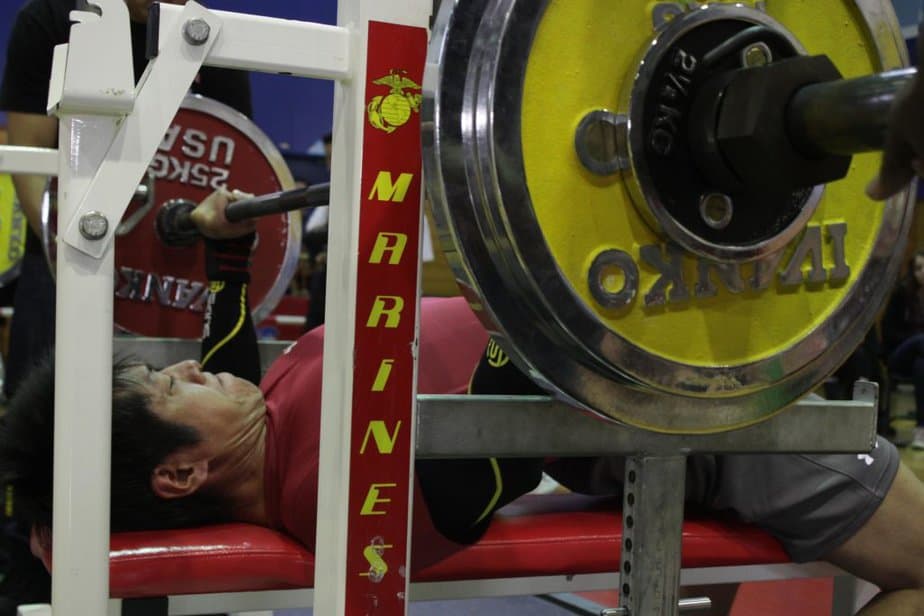 Football teams, for example, make use of the horizontal training for their lineman. They may use the heavy bench press combined with a lighter bench press with resistance bands on both sides to train strength and stability in their upper body. Med ball training can also be implemented in lateral, vertical, or horizontal plane which gives you valuable stimulus along different plane of strength.

Why Should Athletes Take Advantage of this Training?

Athletes need to make sure that they are training optimally. This means training for strength in sport specific niches by implementing movements that simulate how you would perform in that sport.

Soccer and football strength training, for example, will use more movements that help with lateral and horizontal planes. A volleyball and basketball training regimen would want to use more vertical types of movements.

Just to clarify, any type of FCT contrast training will benefit the overall power and explosiveness of the athlete regardless of what they choose to incorporate. It’s just a question of what is more optimal for sport-specific types of situations and how to train the best for them. Yes, there is some overlap of movements between sports, but you should really try to replicate similar movements from gamelike scenarios into your French Contrast training.

It is not hypertrophy training! Yes, you will fatigue your muscles due to the intensity and loads being used. You will gain strength and muscle throughout your progress, but don’t expect to have a bodybuilders physique. The size of the muscle does not determine the strength or power of it. Someone who is not as chizzled but trains for power could produce more force than a ripped bodybuilder.

How to master the French Contrast Training

To get the most out of French Contrast Training, you would want to slowly increase your weight by 2.5% over the weeks. It will take a few weeks to maybe add one more rep into your regimen, but your overall athletic performance will be showing gradually as you progress within this training. 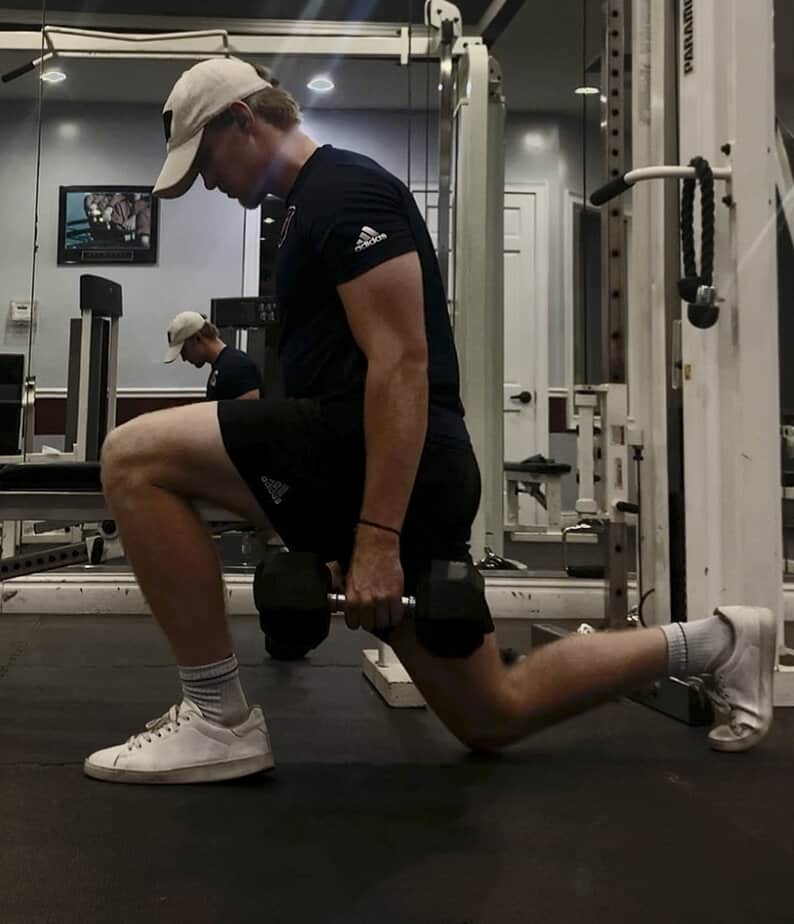 It is crucial to implement single leg/limb lifts or functional strength lifts into the French Contrast training. It is beneficial to have mastered various types of movements with your body in order to move better in all the planes of motion.

As you can tell from the workout presented, I was only doing vertical movements. It is important to implement different planes of motion into your training. It is not advantageous for an athlete to be strong in one plane of motion while being weak in another. Training the FCT in all planes of motion makes for improved coordination and stability when performing in a game.

Be sure to keep your training open to slight changes in certain lifts. You can still train for explosive power and strength using variations of movements. It is very beneficial to keep the muscles guessing and providing a different motion from time to time.

With consistency and maximum effort, in just a few weeks to a month you’ll start to jump higher and run faster than what you thought you could. Your overall athleticism will increase and will transfer smoothly into your sport. The French Contrast Method just may propel you to the top of your game. 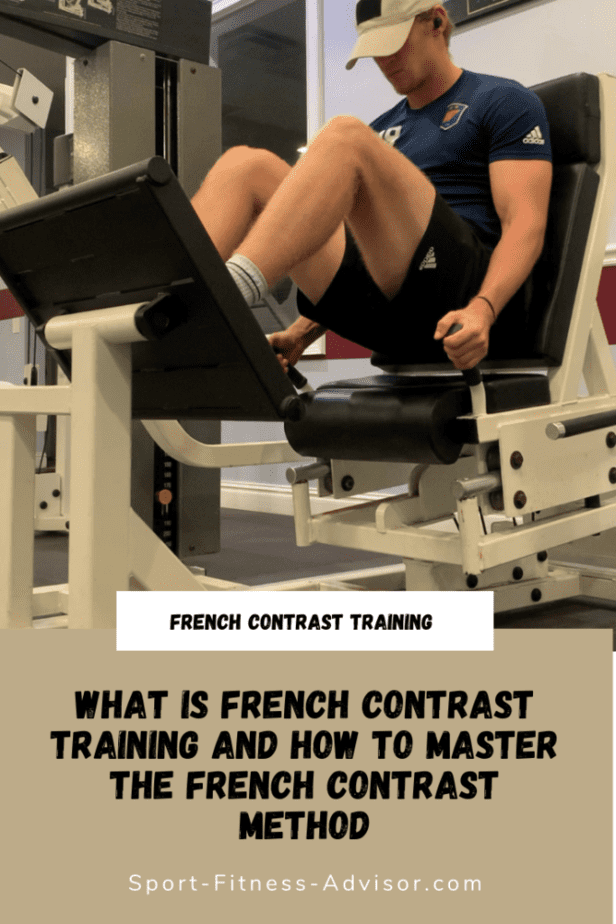